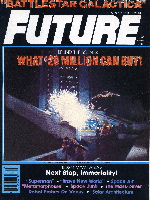 Wrong. Recent advances in gerontology (the science of aging, not to be confused with geriatrics, the treatment of the aged) have led many sober and cautious scien­tists to believe that human lifespan can be doubled, tripled or even extended in-definitely in this generation. If these researchers are right, nobody can predict your life expectancy. All the traditional assumptions on which the actuarial tables rest are obsolete. You might live a thou-sand years or even longer.

Of course, science-fiction people are just about the only audience in the country not staggered by the prospect of longevity. We’ve been reading about it for decades, and such superstars as Heinlein, Clarke and Sirnak have presented the subject very thoughtfully in several novels. But . . . longevity in this generation? In lecturing around the country on this topic, I have found even some SF freaks find that a lit­tle far out.

Well, consider: all aspects of research on longevity are accelerating and there has probably been more advance in this area since 1970 than in all previous scientific history. For instance, when I first wrote an: article on this subject in 1973, the most op­timistic prediction I could find in the writings of Dr. John Bjorksten, one of the leading researchers, was that human: lifespan might soon be extended to 140 years.But only four years later, in 1977, Dr. Bjorksten told the San Francisco Chronicle that he expects to see human life extended to 800 years.

This does not merely indicate that Dr. Bjorksten’s personal optimism and en­thusiasm have been increasing lately: he is reflecting the emerging consensus of his peers. Dr. Alex Comfort, generally regarded as the world’s leading gerontologist by others in the profession (although better known to the general public for his lubricious Joy of Sex books) said recently, “If the scientific and medical resources of the United States alone were mobilized, aging would be conquered within a decade.” (Italics added.) That means most of us have a good chance of living through the Longevity Revolution.

Similarly, Dr. Paul Segall of UC-Berkeley predicts that we will be able to raise human lifespan to “400 years or more” by the 1990s. Robert Prehoda, M.D., says in his Extended Youth that we might eventually raise life expectancy to “1,000 years or more. Hundreds of similarly optimistic predictions by researchers currently working in life extension can be found in Albert Rosenfeld’s recent book,Prolongevity.

Expert opinion on longevity has grown steadily more optimistic every time it has been surveyed, because the lab results are better every year. In 1964, a group of scientists was polled on the question and predicted chemical control of aging by the early 21st Century. In 1969, two similar polls found scientific opinion predicting longevity would be achieved between 1993 (low estimate) and 2017 (high estimate.) Dr. Bernard Strehler, one of the nation’s leading researchers on aging, predicted more recently that the breakthrough would occur sometime between 1981 and 2001.

At the March 1978 Alcor Life Extension conference in Los Angeles, some of the experimental results justifying such forecasts were presented. Dr. Paul Segall reported on work in which he had increased the lifespan of rats to double the normal, with some evidence of rejuvenation as well. Dr. T. Makinodan did even better with ex­perimental fish, tripling their lifespan. Dr. Benjamin Frank reported a slowing down of aging in human subjects given nucleic acids.

The Russians have even claimed that the breakthrough has already been made. In August 1977, Dr. Sukharebsky and Dr. Komarov predicted that their current work would raise human lifespan to “400 years and even more.” Two months later, in Oc­tober 1977, two other Russian scientists, Dr. Mekhtiev and Dr. Mine, claimed to have stopped the aging process in 25 ex­perimental human subjects.

Even cryonic freezing – the long-range gambler’s approach to longevity, when it started in the 60s – Is advancing by leaps and quantum jumps. An October 1975 McGraw-Hill poll found the majority of experts in the field believed cryonic freezing would be perfected and perfectly safe by 2000. Dr. Paul Segall, since then, has several times brought back to life cryonically frozen hamsters — animals which were, by all life-function readings, “dead” during their freezing. Not only were the hamsters’ hearts not beating (the 1960s“definition of death) but even their brain waves stopped (the 1978 definition of death); yet, after revival, they were as frisky and playful as if they had just had a good nap.

The full impact of the Longevity Revolution can only be grasped by con­sidering the “extremists” in the field-those who are aiming beyond life exten­sion to physical immortality. Albert Rosenfeld, science editor for Saturday Review, devotes a whole chapter of his Prolongevity to these Immortalists (as they call themselves) and he does not treat them with contempt. Among the leading Immortalists are Dr. Paul Segall (already mentioned several times here), novelist Alan Harrington, a Christian clergyman named A. Stuart Otto, who heads a group called The Committee for the Elimination of Death, and the ever-controversial Dr. Timothy Leary, who is currently touring the college lecture circuit preaching life-extension with the same fervor he once gave to consciousness expansion.

Some of the mainstream longevity researchers also seem to be closet Immortalists. Dr. Bernard Strehler, for instance; usually talks only of life-extension, but in art interview with Rosenfeld he stated flat­ly, “Man will never be contented until he conquers death.”

The basic Immortalist argument runs as follows. Be as conservative as you like in estimating the probable life-extension breakthroughs of the next two or three decades. Assume the relatively tame prediction made by Dr. Bjorksten back in 1973, when this research was (by com­parison with its present status) in its infan­cy. Say that Bjorksten was right then and we can only expect to see lifespan increas­ed to 140 years in the near future.

But if you will be around that long, what will happen in the meanwhile?

In short, even if we can only double lifespan in this generation, we will still be around when further breakthroughs will probably triple it, quadruple it or raise it into millenniums.

And then some of us will be here when the next quantum jump in lifespan occurs, and the next, until Immortality is achieved.

Longevity, Rosenfeld says, means “to have time to travel everywhere, and, go back again and again to favorite places. To go on learning – new skills, new sports, new languages, new musical instruments. To undertake a variety of careers and a diversity of relationships, for some, perhaps, a diversity of marriages. To read everything you want to read. To listen to all the music. To look at all the pictures and even paint a few. To savor and re-savor experience and arrive, not at boredom, but at new bevels of appreciation.“

Well, yes, but that’s only part of what longevity offers. It means, also, to live through more scientific and technological breakthroughs than humanity has ex­perienced in its whole history. (After all, every branch of knowledge is increasing at an accelerating rate these days.) To live through the Age of Abundance predicted by Buckminster Fuller, when Space Industrialization ends the Malthusian crunch of planetside living and poverty disappears once and for all. To be around when physicists tap the zero-point energy and give us Super-Abundance. To see the consciousness revolution of the 60s blossom, as Tim Leary predicts, into an intelligence revolution, as we learn to program our nervous systems as efficiently as we program computers. To see a world without stupidity, poverty, neuroses and war; where the human brain will at last function smoothly, efficiently and ecstatically, to solve problems, maximize personal growth and enjoyment, free itself of implanted limitations and fears.

To live in O’Neil’s space towns arid space cities and then to move on, with the next expanding wave, to the stars. To meet new friends, as human-dolphin, human-primate and human-extraterrestrial communication leap forward. To have unlimited space, unlimited time and unlimited consciousness to enjoy space and time.  Possibly to see time-travel achieved and share in its fallout, Immortali­ty, when we can go anywhere in the past or fatale, stay as long as we want, and come back to the moment we left.

There is no Utopian scenario we can dream of for our descendants that cannot be ours, too . . . if the Longevity Revolu­tion is made our top national priority. I can’t see why anything else should be a higher priority: there’s nothing more worth living for than life itself. A crash project, similar to the Atom Bomb race of the 40s or the Space race of the 60s would certainly produce dramatic results within a decade. (We had the A-bomb five years after Roosevelt made it a national priority, the first man on the Moon eight years after Kennedy made that our goal.)

We have spent billions on Death since the cold war began 31 years ago; it is time we spent an equal amount on Life.

After all, if reading science-fiction is so much fun, wouldn’t living it be even more of a turn-on?

This entry was posted in Essays and tagged life extension. Bookmark the permalink.