Sex and the Mind-Expanding Drugs 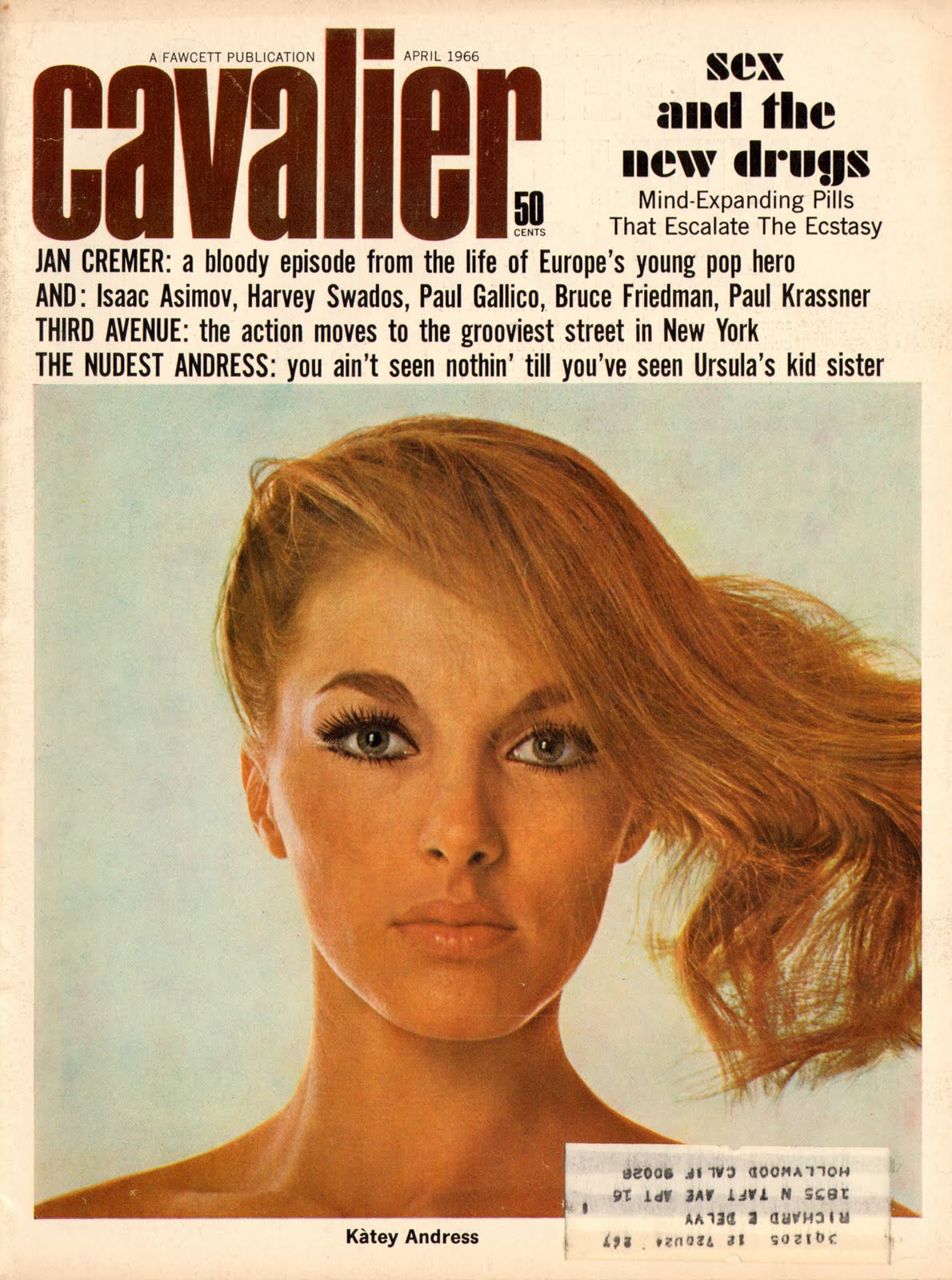 “Sex and the Mind-Expanding Drugs”
by Robert Anton Wilson

Hallucinogens – the authorities notwithstanding – will be used from now on by some of the people to escalate their sexual ecstasies.

Several years ago, Paul Krassner started a rumor that the government possesses a super-super-weapon known as the O-Bomb-O for Orgasm – which would defeat an enemy by rendering him into such ecstatic transports of delight that he would have no energy left to fight, Naturally, various hipsters, lunatics, philosophers and other social deviates began wearing buttons demanding lewdly:

Like many another wistful and mordant satire on our times, this O-Bomb joke has shown a recent tendency to come true. The O-Bomb, otherwise known as the psychedelic chemical, has been dropped right in the middle of Whitest America. The initials LSD are now better known than LBJ. Marijuana is growing in 97 per cent of the nation‘s window boxes. Peyote is the only Indian word, aside from tomahawk, that every freshman could spell correctly on a recent examination at a well-known university. In short, we are living in the early Zonked epoch of the Orgiastic Age. While authorities have been wondering how to head oft the Hallucinogenic Revolution, the revolution has already occurred.

A dozen consciousness-expanding and sensation-magnifying drugs are available, at reasonable prices, anywhere in the country, and there are no specific laws yet against most of them.  And the word is out that – in addition to creating hallucinations, visions of God, instant psychoanalysis, telepathy, and various creepy and/or ecstatic sensations nobody has yet been able to verbalize – these potent potions also can lead one into sexual fulfillment beyond anything imaginable to those who haven’t had it themselves.

It is this last aspect of the psychedelics that accounts chiefly for their sudden popularity. “Americans,” as Tallulah Bankhead said long ago, “have sex-in-the-head, and that’s a hell of a place to have it,” All of us are hipsters in the special meaning that Norman the Mailer gave to the word hipster in his White Negro: “The hipster’s search is . . . a religious quest . . . for the perfect orgasm.” No matter what his sex life is like, every American harbors the Promethean dream that it can be bigger, better, more cosmic, more earth-shaking. God is not dead; His name has been changed to Simultaneous Climax.

The psychedelics are the answers to our dreams (and, as Goethe remarked with typically Teutonic gloom: Beware of what you dream of – you night be so unlucky as to get it). There can be no doubt, in spite of the attempts of the au­thorities to cover this up by emphasizing the occasionally nightmarish side effects of these chemicals, that every psychedelic is also a magnifying glass which expands orgasm into three or four new dimensions,

A Harvard research project, to quote just one bit of “scientific“ evidence, gave LSD or psilocybin to twenty-five married couples in their own homes, and all reported a remarkable intensification of the sexual experience. Such terms as “cellular orgasm,” “pulsating energy patterns,” “internal fireglow” and “melting and flowing of the entire body” were used by the lucky participants. The report states that the drugs created “profound feelings of interpersonal communion and unity which endowed every action with beauty and significance.”

Last January New York University or­dered a number of students (variously reported as from six to twenty) out of a dormitory in its Washington Square com­plex because of reported use of mari­juana. At press time no other discipli­nary action had been taken against the students who included some girls living in a separate wing of the dormitory.

Show biz people use it continually. A professional marijuana “dealer” told me recently that his clientele included, along with bohemians and musicians, many young office workers, professional people and one lawyer.

The effects of cannabis last from about twenty minutes to about one hour, but often seem much longer due to distortion of the time sense. Habitual users say that sex can be had, ecstatically, at any time after the pot has begun to take effect. With prolonged use, the drug tends to create a feeling of religious brotherhood with other pot-heads and a paranoid dis­trust of non-users; the pot-head never knows when somebody will turn out to be an FL (fuzz-lover) and turn him in.

Not a psychedelic, and not illegal, is a drug similar in some ways to cannabis as an orgasm-booster: amyl nitrate. A cousin of ordinary smelling salts, amyl nitrate, when inhaled, creates an intense, cocaine-like exhilaration for something less than a minute. Faggots have used it for years, and the word began spreading to the rest of us only recently: If you and your girl sniff this stuff just before orgasm, you will have an experience unlike anything you can imagine in advance. Amyl nitrate is known as “poppers” and is used, both sexually and non-sexually, on many col­lege campuses. Medical authorities re­gard it, like pot, as harmless.  These are grade school level in the psychedelic hierarchy, however. High school is peyote, psilocybin and mescaline. (Reform school, to follow the meta­phor until it staggers, is Jimson weed, yage and belladonna.) Peyote, a cactus, and psilocybin, a derivative from a mushroom, have been used in Mexico for more than 2,000 years. Peyote spread to the Indians of the United States about 70 years ago and is now used in religious rites by the Native American Church. Both peyote and psilocybin have been traditionally connected with telepathy, clairvoyance and “projection of the astral body.” Mescaline is one of the four active ingredients of peyote and is available in most metropolitan areas.

The effects are approximately the same whether one uses peyote, mescaline or psilocybin, although there is some ten­dency toward side effects of nausea with peyote. The experience lasts from six to twelve hours, and, typically, includes anx­iety, bolts of quick terror, beautiful hallu­cinations, telepathy, sudden self-insights, moments when “time stops” and you dwell in Eternity, space-disorientations, and a growing sense of tranquility and love for all living creatures. The body-tingle, or general eroticism, of cannabis also appears and much stronger and with more benevolence in a peyote or psilocybin high.

The pot-head feels sexy; the peyote user, more likely, will become loving, and sex will only be part of the feeling. Ex­perienced voyagers say that peyote sex is superb, much better than pot-sex, but should not be started until late in the “trip” – earlier hallucinations are apt to destroy one’s ability to focus on the loved person. By the fifth or sixth hour, when the hallucinations have passed and typi­cally benevolent tranquility has begun, sex – with a truly compatible partner – is an unspeakably sacred and ecstatic ex­perience. Sex with an incompatible part­ner can send you spiraling back into hallucinations or anxiety.

Psilocybin and mescaline are illegal, but they are not under the control of the Harrison Act and hence do not concern the U.S. Narcotics Bureau. The dangers of getting busted are small unless you make a lot of noise and the neighbors call the gendarmes. Peyote is legal every-where, except in New York, Massachu­setts and Pennsylvania.

Jimson weed, belladonna and yage (pronounced yah-hay) are the Vietcong of the psychedelic world. Three kids were arrested in California recently running down the street howling at passersby to get the red, white and blue alligators off them; it turned out that they had been eating Jimson weed. Belladonna is simi­lar. A friend who tried it told me of seeing giant gorillas, Nazi storm troopers, naked witches, and polar bears wearing black turtleneck sweaters. Yage, typically, transports you to Yage City, which is said to be a cross between Easter Island and ancientEgypt, and telepathy is very common, (yage is called telepathine, in some medical books). Temporary blindness, unconsciousness, psychoses and acute vomiting are recorded side effects of all three of these.

A dose of belladonna that’s safe for one person can be fatal for another, which is one more reason for avoiding this kick. It is noteworthy, however, that bella­donna was used in the medieval period as a sex-booster by the so-called “witches.”

Morning-glory seeds, which are coming into wide use, are the college-level in the psychedelic hierarchy. The varieties that cause sensation-magnification and mind-expansion are Heavenly Blue, Pearly Gates, Flying Saucers and Wed-ding Bells. A hundred seeds are said to be perfect for a sexual “trip” (200 take you into hallucinatory and religious experi­ence; 250-500 will bring you all the way to ego-loss and the heights of mysticism; above 500 is dangerous).

On 100 Heavenly Blue seeds, erotic sensitivity becomes acute all over the body, color and form take on new beauty and “depth,” and everything appears pro­foundly meaningful, in a definitely re­ligious sense. This is a surprisingly “cool” experience – cool as heroin and other ad­dictive drugs are cool – and lacks the nervous, rapidly “flowing” emotional tone of peyote, psilocybin and LSD. It is an experience “of the mountains,” of clarity and calm and clear air, with profoundly pantheistic tranquility at the heart of it. Orgasm becomes more an act of giving than of taking – an act of giving in, of surrender in the widest sense, of happen­ing rather than doing. The seeds are legal everywhere.

Lysergic acid diethylamide tartrate-25, or LSD, is post-graduate work. It is the best, and most dangerous, of all psy­chedelics. It is the joker in the pack, acting sometimes like the seeds, some-times like belladonna or Jimson weed, sometimes like peyote, and frequently acting like nothing ever recorded before even in its own weird history. It has cured schizophrenia, alcoholism, criminal psychopathy, frigidity, and, it has been said, even cancer, in some cases and has been ineffective against them all in others; it has created the most mystical and God-centered of all psychedelic experiences; it has often led to temporary psychotic breakdowns; a few people have been driven to suicide by it. Nobody should ever try it without professional supervision.  LSD is illegal throughout the nation, but easily available in cubes retailing for $3 to $7 in most big cities through extra-legal sources. The morning-glory seeds can be purchased legally anywhere, and $1 will buy enough for a hundred-seed sex-jaunt, or you can grow your own. Belladonna can be purchased, in various medicines, at drugstores, and $1.50 can buy ten “trips.” Jimson weed you have to find growing wild. Yage, imported from South America, costs about the same as LSD; so do mescaline and psilocybin. Prices on cannabis vary widely, but $1 for a “roach” (cigarette) is typical; three roaches, passed around a circle one by one, will get a group of six to eight peo­ple quite happy.

These prices are especially remarkable when you remember that an alcohol-head, not necessarily an alcoholic but a “heavy drinker,” can spend $15 to $25 a week on his habit, and an addict of heroin call quickly reach the stage of enslavement where his need costs him $65, or more, per day.

Psychedelic prices are misleading, be-cause hardly anybody, except pot-heads, ever wants to take more than one or two “trips” per month. The afterglow and the intellectual stimulation always take a few weeks to wear off, and you just are not interested in another “trip” for a while.

Such a cheap Instant Transcendence, obviously, is not going to be effected by laws or persecutions anymore than booze was affected by the Volstead Act. The Psychedelic Revolution has occurred; society is going to have to learn to live with the fact that a certain not-very-small minority is hereinafter going to insist on, and practice, the right to make them-selves more sensitive than the majority, both erotically and otherwise. The O-Bomb has fallen, right in our midst.

This entry was posted in Essays and tagged Paul Krassner, Wilhelm Reich. Bookmark the permalink.